Kentucky Fried Chicken came to life in the small town of Corbin, Kentucky where Harland Sanders developed his trademark “secret” 11 herbs and spices.  Today, visitors can still dine in the original restaurant location and see the kitchen where those first meals were prepared.  Back then it was the Sanders Cafe where he served travelers passing through town.

It’s always interesting to see where the roots of a world wide business were first planted. Today, Kentucky Fried Chicken (or KFC) is the second largest fast-food restaurant chain in the world.  And it all started in this unassuming building that still operates as part of the KFC mega-franchise. Standing outside the original KFC in Corbin, Kentucky where Col. Sanders developed the secret 11 herbs and spices! 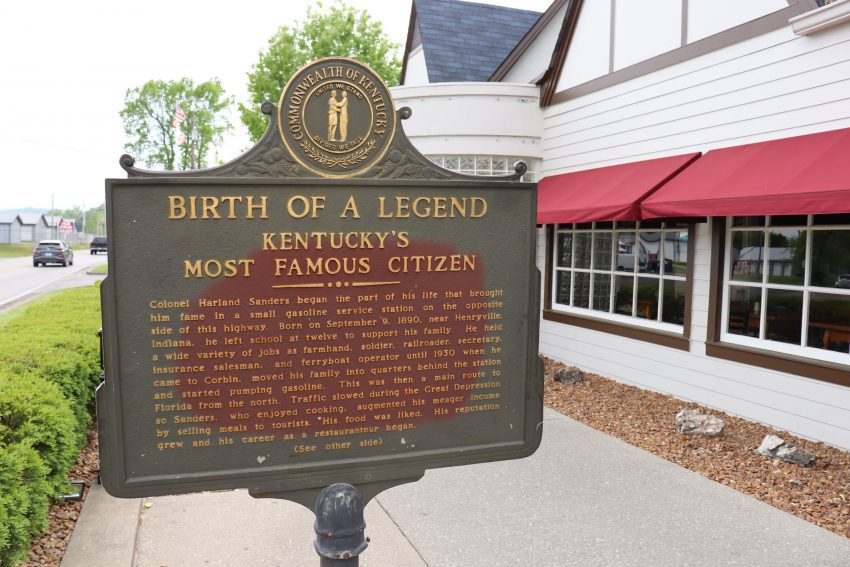 From the street you see the Sanders Cafe sign and a historical marker that notes the birthplace of Kentucky Fried Chicken.  (Even though technically that honor goes to a restaurant in Utah, this is where the recipe and concept actually began.)  Once inside the museum/restaurant you see Sander’s office and the restaurant kitchen, which was purposely designed to be open and viewable by patrons.  According to the museum, Sanders wanted the public to see the food being prepared.  The all white design of the kitchen was meant to quickly spot spills or mess – Sanders was apparently a neat freak and liked things squeaky clean.

It was in this kitchen where he developed the art of pressure-cooking the chicken, which reduced wait times from 35 minutes to just 9 minutes for a fresh meal. Col Sander’s kitchen where the recipe for Kentucky Fried Chicken was invented. The dining area of Sanders Cafe, which was an upgrade from the kitchen table he used to sell his chicken from in the back of a gas station.

On the other side of the building, there’s an actual KFC location.  Near the ordering counter is a small display of memorabilia relating to the early days of the fast food chain.  Business cards, a tub that once contained the secret recipe mix, and some various photos are part of the collection.  It’s not a huge display but definitely worth checking out if you’re in the area.

The odd part of the restaurant is the model of a motel room which literally sits inside the dining area.  Apparently, Sanders purchased a motel across the street and used his restaurant as a way to advertise the motel.  His thinking was if people saw a nice, clean room while grabbing a bite to eat – it would encourage them to stay in town.

In 1955 – he sold the properties and worked on selling his chicken recipe across the country.  Sanders charged restaurants four cents per piece of chicken to use his recipe and likeness in branding.  He’d sell the company for $2 million in 1964 when Kentucky Fried Chicken had 600 locations and was the largest fast food chain in the United States. 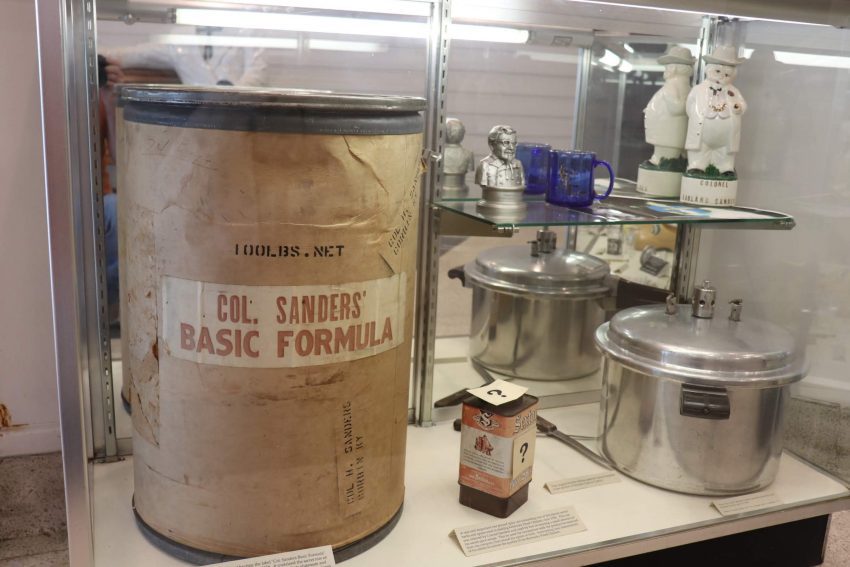 So what are the secret herbs and spices that are used to make Kentucky Fried Chicken?  The original recipe is under lock and key in a vault in Louisville, Kentucky.  In fact, today the mixture is still produced in two different locations to keep it secure.  But, thanks to the internet and a scrapbook found by Sander’s nephew – most people agree this is probably the recipe: The Kentucky Fried Chicken Museum is free and open to the public. It is located at 688 Hwy 25 in Corbin, Kentucky.