REDISCOVER AMERICA
Road Trip To San Antonio, Texas
Finding The American Dream – Why I Wrote...
This is the Covered Bridge Capitol of the...
This Is The Most Beautiful Drive In America
Covington Georgia is the Hollywood of the South
Columbia: A Gateway To South Carolina
Tennessee’s Country Music Passport
Petit Jean State Park in Arkansas
Quincy, Illinois – An Authentic River Town
Things To Do In Little Rock Today
MIDWESTODDS & ENDSSIGHTSEEING

First of all, no ducks were harmed during the writing of this story.

Indianapolis has one of the few remaining duckpin bowling facilities in America.  According to the website duckpins.com, a website devoted to duckpin bowling enthusiasts – there are just twelve states that have these lanes with most of them concentrated in the state of Maryland where legend has it the game was invented around 1900. (Though some reports of duckpin bowling can be traced back even earlier in the Boston area.)

Located in the Fountain Square neighborhood of Indy – Linton Calvert brought the game to town back in 1986.  An avid bowler in his younger days, Mr. Calvert discovered duckpin bowling back in 1970 while stationed in the Army. The duckpin ball weighs three pounds and is slightly larger than a softball. (4-3/4 in to 5 in diameter to be exact.)  The other noticeable difference – no finger holes.

The pins are different, too.  They’re 9 inches tall.  According to Wikipedia: “Duckpins are shorter and squattier than the regular pins used in ten pin bowling”  (Hands up if you had no idea “squattier” was a word.)

In duckpin bowling – you’re allowed three throws instead of two.  Oh and by the way, it doesn’t matter matter if you throw the ball right down the middle – you’re probably not going to get a strike.

“Kids can throw it as well as any adult and both men and women are both equal when they play” according to Mr. Calvert.  His standard answer when guys ask for a tip on mastering the game?  “I tell them to drink a beer”. 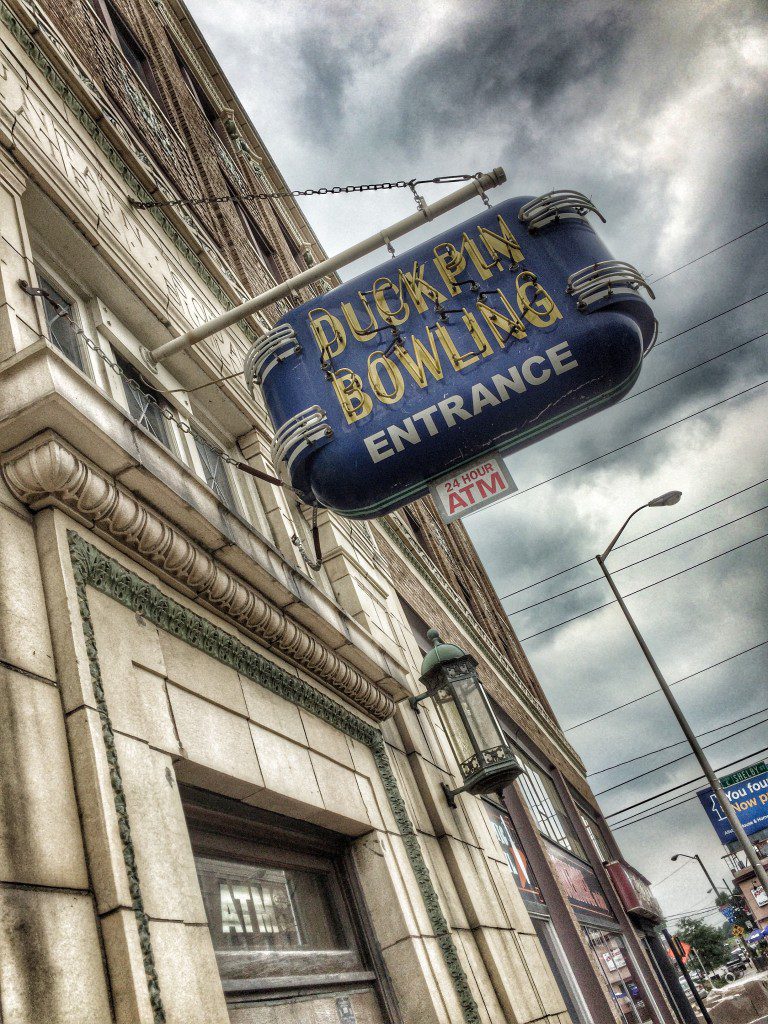 The entrance to the Duckpin Bowling at Fountain Square in Indianapolis. This location is one of just a handful of spots across the country that still offer the game.

Naturally I set out to master the game – how could it possibly be this difficult?  The ball fit perfect in the palm of my hand.  I looked ahead, lined up my arm with the center pin and off it went.   My first throw was pretty good – probably enough to knock down 7 or 8 pins – maybe even a strike, in a regular game of bowling.

However, this isn’t regular bowling. You can watch for yourself what happens when I roll a duckpin bowling  ball right down the middle of the lane:

Duckpin bowling today! Threw the ball RIGHT down the middle and only two pins fell – what a crock! Haha But so fun!! #bowling #fun #Indy #sports #travel

“This is a great activity for a company outing as the cute receptionist has just as much a shot at winning as the muscular, athletic guys in the office.  It’s also great for families.”

Calvert and his wife bought the Fountain Square theater building in 1993.  Located just a short drive from downtown Indianapolis, the complex features unique spaces for meetings or special events,  very cool hotel rooms known as the “Fountainview Inn” and places to drink and dine. First opened in 1928, the building has gone from “the big light on the avenue” to a Woolworth’s department store to a vacant office building in disrepair.  In shambles,  Calvert and his wife bought the Fountain Square theater building in 1993.   Located just a short drive from downtown Indianapolis, the complex now features unique spaces for meetings or special events,  very cool hotel rooms known as the “Fountainview Inn” and places to drink and dine.   Of course the main attractions are the two duckpin bowling lanes housed on the 4th floor and basement.

There’s a garden on the rooftop that’s open to the public certain days of the week (weather permitting from Memorial day to Labor day) where guests can take in a terrific view of the Indy skyline and enjoy a meal or glass of wine. Nashville may just be the “mural capital of the

True story - I was at an awards show about 15 year

It’s crazy to see how fast Nashville and the sur

Happy 75th birthday to Dolly Parton! Was there any

Howdy gals, I’d like to wish you a happy Nationa

Flashback to the night I played the washboard at a

So much fun interviewing the Founder of @natdaycal

Just finished the first live video of 2021! I must

Ready for another year of adventure. I’m excited

I’ve seen my share of waterfalls but this will a

Celebrating the end of this stupid year by giving